Whilst neither Mandy or I are in anyway religious beyond as required occasions attending church, a visit to Rome could not be considered achieved unless one visits the big fella. The Vatican eluded me on my last visit here when Pope John Paul was in the chair, but could not miss visiting Pope Benedict or, as his mates call him, Big Benny.

We picked up a few steaks and off we went to have a BBQ with Big Benny. Finally found a laundromat on the way much to Mandy's relief.

Italian's are serious about Laundry

We were warned about the queues so we purchased our tickets before arriving. Also important in this heat not to be held up with a couple of Porterhouses in the backpack, not to mention the prawns. 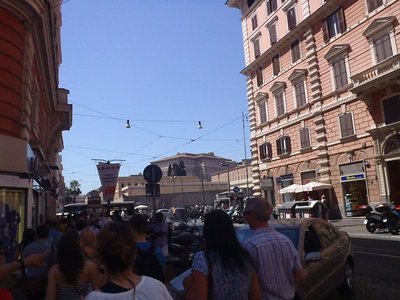 The crowds were starting to form.

Arrived at the "meeting place of the faithful" St Peter's square and I was genuinely amazed at how big it is. Not the place for a BBQ with only 2 pieces of meat and a few prawns for the hotplate. 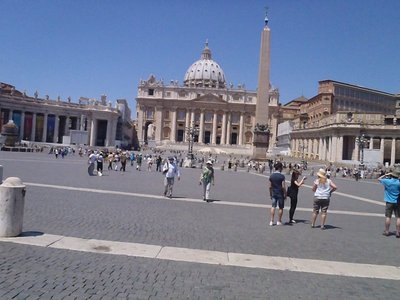 Meeting Place of the Masses

Announced our arrival and whilst we waited for Ben to get us, I struck up a conversation with a couple of goobahs. Sorry, goddamns or yanks as they are better known. They were pretty hung up on the dress code and suggested that I would not get in with only shorts on. I said it was lucky that I was wearing shorts at all. I wanted to wear speedo's given the heat and the BBQ. Mandy as always, very conscious of etiquette felt that speedo's would be a little underdressed given that Ben would likely have sausages on the grill. In speedo's, there could be some confusion and personal damage if I got too near to the grill.

We were collected by staff and asked to put on a yellow sticker and follow them past the masses queueing. Pays to be ahead of the game. 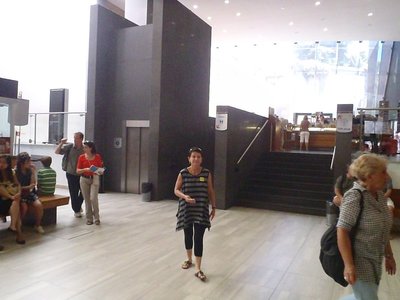 The Vatican Museum is probably not such a spot for Hypocrites such as me. It pretty much highlights the plundering of other heritages and maybe this is not such a great thing. I might be a little unfair as a guest but I would like for example, to look at Egyptian Antiquities in the land of their creation. Maybe a bit heavy for this blog but I wasn't expecting such "in your face displays". 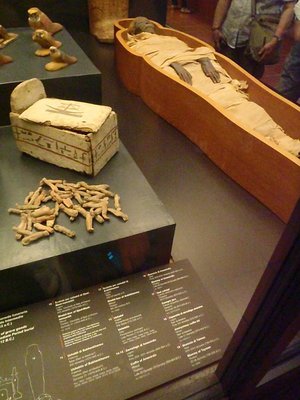 So to a lighter note. Passed through the locker room of the Popes first 11 team. The lockers were pretty flash for a National team in a place with no decent oval. Names above each locker were a bit confusing. I couldn't see one for Wally Lewis the King. 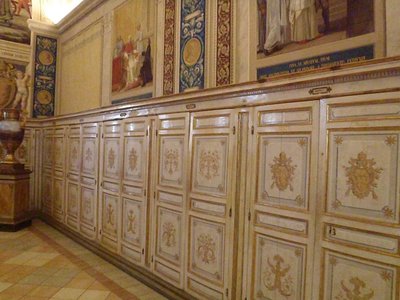 The oval was a little disappointing, looked green enough but full of clover. 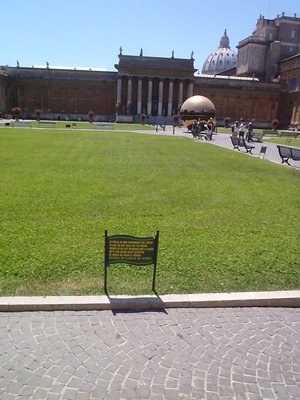 Vatican Oval - Lots of Clover but no training

Into the St Peter's Basilica and it was suggested that I acknowledge the gathering of masses upon the square. In fairness they may have travelled from far and wide and this was a special occasion. 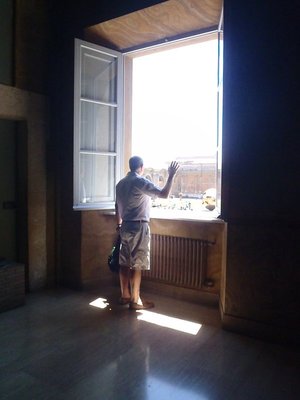 Acknowledging the troops gathered in the St Peter's Square

The Vatican Museum never failed to amaze, at every turn there was something a little different. The romans in the era of Nero had a saying about large feet, large ............ Yet here is an example of one of the biggest feet that I have ever seen and yet? 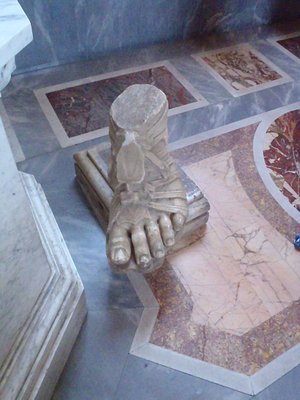 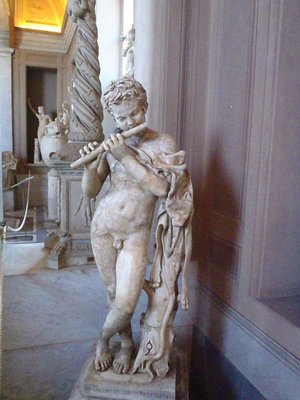 Visited the Sistene Chapel along with a very large crowd and posted a card to our friends. 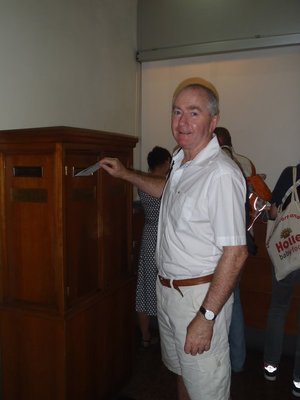 Despatching a postcard from the Vatican City

On the way to the backyard Mandy entertained the visitors with her trick of balancing a pot on her head. Got a great laugh from the Vatican Guards...not 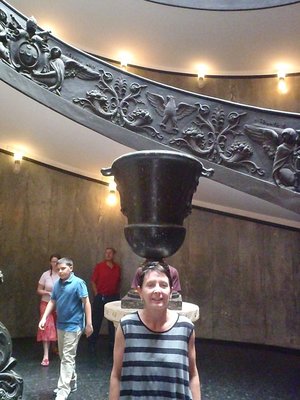 After the forced exit from the Vatican (thanks Mandy, I was enjoying myself and looking forward to lunch with Benny) we walked the square and mingled with the locals.

Then it was off to visit the Spanish Steps and Piazza di Spagna. 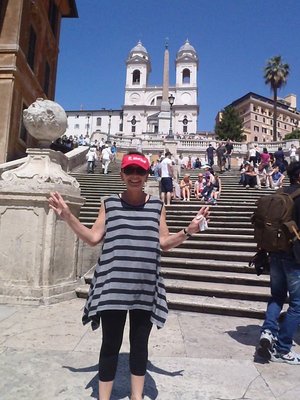 Also happens to be the site where John Keats passed away in 1821 from consumptive breath. (not Mr Google this time but me) The steps are well worn and we climbed to the top amongst the many hawkers and beggars. Stayed for a quiet drink at a cafe overlooking the steps and watched the world pass by. Mandy had a Virgin Mojito ( Mojito = lime, mint, ice, dry ginger and sugar. Virgin = well lets move on shall we) which she said was excellent. I had a Heineken with lime and that was also really good given the temperature. 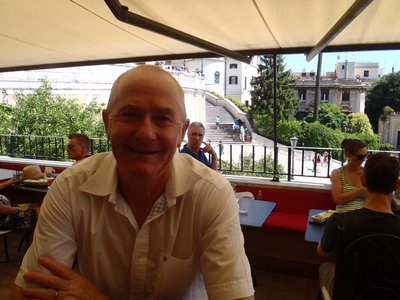 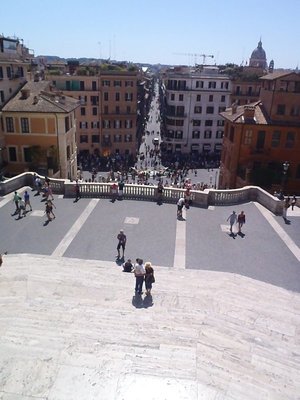 Looking down from the top to Piazza below

And then after a pretty full day we had dinner at the local restaurant....sic (which doesn't serve food - but that's a story for another edition) went back to our room and had porterhouse steak with off prawns instead whilst watching the sun go down over Rome. Tomorrow or tonight could be very interesting. 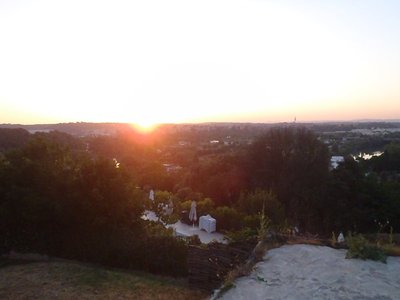 Sunset on Day 4 in Rome

A very long day indeed and tomorrow brings us to our final day with a 7pm night rail trip to Vienna.

Previous Next Table of contents

Comments on this blog entry are now closed to non-Travellerspoint members. You can still leave a comment if you are a member of Travellerspoint.

If you aren't a member of Travellerspoint yet, you can join for free.